CAN YOU FILE A CAMP LEJEUNE LAWSUIT FOR MULTIPLE MYELOMA? YES, AND WE CAN HELP.

Individuals who suffer from multiple myeloma after more than 30 days of exposure to toxic water contamination at North Carolina’s Marine Corps Base Camp Lejeune between 1953 and 1987 are eligible to file a Camp Lejeune lawsuit under the newly enacted Camp Lejeune Justice Act of 2022. Contact the Camp Lejeune multiple myeloma lawyers at Marin and Barrett, Inc. at (888) 348-2735 today for a free, no obligation initial consultation.

Is Exposure to Toxic Water Contamination At Camp Lejeune Linked to Multiple Myeloma?

The effects of exposure to any toxic chemicals depend on—

Not everyone who is exposed to trichloroethylene (TCE), tetrachloroethylene (PCE), benzene, or vinyl chloride exposure will develop a health problem.  But, according to the Agency for Toxic Substances and Disease Registry (ASTDR) there have been health effects that have been linked to TCE, PCE, benzene, or vinyl chloride in populations other than Camp Lejeune who worked with or drank water contaminated with these toxic chemicals. For years, the Federal government knew of the contamination that flowed to the Camp Lejeune water supplies through leaking underground storage tanks and other sources of contamination.  The Federal government failed to test the water coming from the military base Camp Lejeune water treatment plant for carcinogenic chemicals or volatile organic compounds.

A large body of epidemiologic evidence exists for exploring causal associations between certain types of cancer, including multiple myeloma, and trichloroethylene (TCE) exposure. Trichloroethylene is a colorless, volatile liquid. Liquid trichloroethylene evaporates quickly into the air. It is nonflammable and has a sweet odor. The two major uses of trichloroethylene are as a solvent to remove grease from metal parts and as a chemical that is used to make other chemicals, especially the refrigerant, HFC-134a. 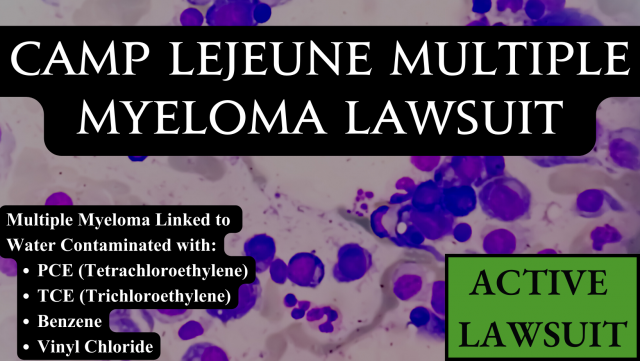 A mortality study of civilian employees exposed to contaminated water at USMC Base Camp Lejeune was conducted by the Agency for Toxic Substances and Disease Registry (ASTDR). The purpose of the study was to determine whether potential exposures to the drinking water contaminants at Camp Lejeune are associated with increased risk of death from specific cancers and other chronic diseases among those who were employed at the base. The contaminants included trichloroethylene (TCE), tetrachloroethlylene (also known as perchloroethylene or PCE), benzene, and two contaminants that are formed when TCE or PCE degrade in ground water: 1,2-dichloroethylene and vinyl chloride.

In addition to the connection between multiple myeloma and Camp Lejeune, there are fourteen other covered conditions for which the V.A. determined a presumptive service connection after they found sufficient evidence to show a causal relationship between exposure to Marine Corps Military Base Camp Lejeune’s tainted water and medical condition.  The presumptive conditions are:

The scientific studies, in addition to showing a high incidence of leukemia, also provide strong evidence of a causal relationship between Camp Lejeune’s water contamination to other illnesses including liver cancer, diseases such as Parkinson’s disease, kidney disease, fatty liver disease, birth defects such as cardiac defects and neural tube defects, as well as prostate cancer, cervical cancer, non-Hodgkin lymphoma and kidney cancer.

Finally, for the first time you can seek financial compensation for the harm you, or your loved one, suffered due to multiple myeloma caused by the contaminated water at the base. On August 10, 2022, President Biden signed into law the Honoring Our Promise to Address Comprehensive Toxins (PACT) Act of 2022. This law permits individuals who lived and worked at the Camp Lejeune Marine Corps Base to seek compensation if they have multiple myeloma.

WHAT IS MULTIPLE MYELOMA?

Multiple myeloma is a cancer that forms in a type of white blood cell called a plasma cell. Healthy plasma cells help you fight infections by making antibodies that recognize and attack germs. In multiple myeloma, cancerous plasma cells accumulate in the bone marrow and crowd out healthy blood cells. Rather than produce helpful antibodies, the cancer cells produce abnormal proteins that can cause complications.

Signs and symptoms of multiple myeloma can vary and, early in the disease, there may be none.  If symptoms do occur, they can include:

The skilled injury lawyers at Marin and Barrett, Inc. stand ready to help you assert your legal rights, take legal action, and pursue a claim for justice and financial compensation for your multiple myeloma by filing an administrative claim with the Navy and eventually a Camp Lejeune water contamination lawsuit.  For years, the United States Department of Veterans Affairs has set up roadblock after roadblock for those veterans and their families suffering from serious health conditions due to their exposure to toxic chemicals in contaminated water at Camp Lejeune in North Carolina.  Recent investigations have found that the U.S. V.A. denied 89 percent of all disability claims involving evidence of an association with the harmful chemicals in the water at Camp Lejeune and MCAS New River.  Now, those veterans whose claims whose claims have been denied as well as non-veterans, such as dependents and base workers, will finally be able to receive justice and financial compensation for their injuries. The experienced personal injury lawyers at the Marin and Barrett law firm stand ready to assist you in filing your multiple myeloma water contamination lawsuit.  From our offices in South Carolina, Connecticut, and Rhode Island, we are assisting Clients with Camp Lejeune claims nationwide. Call now to speak with a Camp Lejeune attorney today.  There is a limited time period in which you may file a Camp Lejeune lawsuit, don’t delay.

The Congressional Budget Office has estimated that the Camp Lejeune claims has projected $6 billion to settle these cases.  However, the CBO is ill equipped to accurately measure the potential liability and value of claims in these cases.  With over 900,000 individuals exposed to the toxic water contamination, it is difficult to even estimate the total number of claims that will be filed.  Individual Camp Lejeune multiple myeloma settlement amounts will be determined based on an exhaustive review of the individuals medical records, medical expenses, and other relevant medical evidence.

Similar toxic exposure multiple myeloma lawsuits have resulted in a wide-range of jury verdicts and settlements.

If you have multiple myeloma or another illness due to exposure to water contamination at Camp Lejeune, reach out to our legal team for assistance. We can help you seek the financial compensation you deserve through a Camp Lejeune lawsuit. Call the Marin and Barrett Law Firm today at (888) 348-2735 for a free multiple myeloma claim evaluation.

At Marin and Barrett, Inc., our toxic water contamination lawyers are well versed in the dangerous of exposure to TCE and the scientific linkage between TCE exposure at Marine Corps Base Camp Lejeune and multiple myeloma. Our attorneys are initiating Camp Lejeune lawsuits for multiple myeloma victims and other victims of water contamination. Call us today and we can provide legal advice and help those suffering with multiple myeloma due to their exposure to contaminated water at Camp Lejeune that had been contaminated with toxic chemicals including TCE, PCE, vinyl chloride and Benzene recover financial compensation. Our experienced water contamination attorneys can help you begin to gather the evidence you will need to pursue your claim which may include (1) your birth certificate, (2) your marriage license, (3) medical records showing your medical care, diagnosis, and treatment, (4) your health care expenses, (5) your Marine Corps base camp housing records, and (6) military personnel and military service records.